The Beer Taps - How They Work

The beer taps or faucets are where you finally get to see some beer. For such a simple device there are myriad choices of faucet styles and quality.

However, when it is all broken down there are four faucet categories:

Within these categories there can be a lot of diversity.

We'll start with the most common type - the one you probably have now:

This faucet operates using a lever action of the tap handle to push open the internal valve allowing the beer to flow through the faucet body and out the spout.

The remaining parts are the collar, bonnet, friction washer and ball washer that seat the lever in place and control its movement; the shaft seat washer that seals the valve and the coupling washer that seats the faucet body to the beer shank. 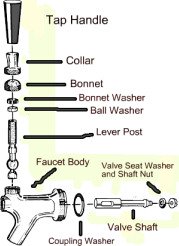 The underside of the faucet body includes two small holes that allow air to enter the faucet. One during the act of pouring to provide a smooth flow of beer; the other to allow beer left inside the faucet body after pouring to drain out through the spout. This helps prevent the growth of microorganisms in the faucet and the serving of that small portion of stale beer that would otherwise reside in the faucet between pours

The faucets are available in brass, nickel plated brass and stainless steel. We would recommend stainless steel for its durability and food safety qualities. They also come in self closing versions that have the lever spring back into the closed position with the tap handle is let go.

Advantages: easy to find, easy to disassemble and clean, easy to operate, beer does not reside in significant quantity inside the body of a closed faucet.

Disadvantages: droplets of beer that remain in the faucet when closed are exposed to the atmosphere which invites microbiological activity (yeast, mold and bacteria growth).

Ooperates in an almost identical way to the rear closing faucet except that the valve is in the front of the faucet, just above the spout. These faucets have a spout/nozzle that is removable for cleaning. In all other respects the parts of the faucet are the same. However, the valve shaft is usually made of growth inhibiting plastic. Though the parts are the same in number, they are not interchangeable with the parts of the rear closing faucet.

Advantages: easy to disassemble and clean, easy to operate, beer that resides in the faucet when closed is not exposed to the atmosphere thereby preventing microbial growth.

Disadvantages: difficult to find, beer that resides in the faucet body when closed becomes warm causing foam problems when pouring.

Next are the Creamer Faucets. This category has two subdivisions. One we'll call Creamer Faucet and the other Stout Faucet. Though they operate in very different ways, they have the creamer capability in common.

A Creamer Faucet is a specialty faucet that operates in a very similar way to the rear closing faucet above. The valve of the creamer faucet however, activates in forward and backward directions. When pulling on the tap handle opens the valve in the standard way, but when pushing back on the tap handle air is sucked into the beer in order to top your glass with a dense and long-lasting foamy head. This is a good quality for certain ales and in the case of Irish Dry Stouts like Guinness has evolved into...

The Stout Faucet is a creamer faucet which also contains a restriction plate that barely allows liquid through. Downstream from the restriction is a flow straightener that then allows the highly agitated beer to flow into the glass in a controlled way while releasing dissolved gas along the way. This gives these beers their unique cascaded foam look and creamy texture. In order to serve with this type of faucet you will need a specific gas mix to pressure your draft service.

The stout faucet is oriented vertically rather than horizontally as most faucets are. Pulling on the tap handle pulls up on the valve allowing the beer to flow into the nozzle that contains the restriction plate and flow straightener. Pushing back on the handle provides the creamer effect.

These faucets come in brass or stainless steel.

Advantages: either of these faucets can provide a unique way to serve draft beer and both can be altered to serve beer in the standard fashion. In the case of the Stout Faucet you must remove the restriction plate and flow straightener.

Disadvantages: They are expensive to purchase at upwords of $100 or more. Guests or bartenders that don't understand the operation of the faucet will have problems especially when serving standard beer through these faucets. They are also somewhat more difficult to disassemble and clean as there are a number of additional internal parts.

A specialty faucet that allows the user to adjust the flow of beer right at the faucet. This can help eliminate foaming problems when a variety of beers are being served using a single pressure source.

For this reason they are very common in brew pubs that will often change a beer style in the middle of the operating day.

Say there is a switch from a porter to a lager on the same tap - without changing the system pressure the bartender can slow the flow of the lager down as it will have more dissolved gas and would foam considerably if allow to surge out at the same rate as the low-carbonation porter.

The variable flow control faucets operate very similarly to the rear closing faucet, but have the addition of a restriction valve inside that can be controlled with either a knob or lever assembled on the body of the faucet.

Advantages: The ability to adjust the flow of beer from the faucet, at the faucet without changing the system pressure. They tend to have a unique look that you might find attractive. Disadvantages: expensive to purchase. They also are difficult to disassemble and clean.

Return to Draft Beer Equipment from Beer Taps
Click to view our Terms of Use. Copyright 2009 draft-beer-made-easy.com