All About Beer Shanks

Beer shanks are another piece of equipment needed to deliver beer to your glass. It provides a transition between the beer line and the faucet.

It is needed because the faucet has to be solidly anchored in order to function (the exception is the picnic tap which is hand-held). That anchor is the draft tower or cooler/refrigerator wall.

The beer shank assembly varies with nature of the draft system involved, but the basic functions are the same:

1) provides a place to attach the beer line

For most installations there are three beer shank types: Straight Beer Shank - is the type most often used on refrigerator conversions and assemblies through cooler walls. This type requires a hex nut, tailpiece, washer and clamp for attaching the beer line in the same manner as attaching to the coupler on the other end of the beer line.

These shanks come in various lengths to accommodate different depths of wall/door thicknesses. They are measured from the very end where the faucet would attach to the outside end. Most use a 1 inch hole through the wall or door. If you are purchasing a new shank, be sure to measure the length correctly.

Nipple Beer Shank - is the most common type found in kegerators. A hose barb (nipple) is incorporated in the assembly of the shank for attaching the beer line and clamp. In some of these shanks the nipple is removable in others it is permanently attached.

The removable nipple assemblies have a flare nut and packing gland to hold the nipple in place and prevent leaking. These parts however can break away if handled roughly.

Fortunately, the permanently attached assemblies are newer and more common. 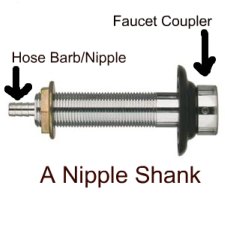 These are made specifically for the column style draft towers on kegerators.

In some assemblies the nipple is an extended tube the length of the draft tower with the beer line attaching to it within the keg box instead of up in the tower. On the extended type of assembly the tube has a brazed-on threaded fitting to accommoadate a hex nut, washer, tailpiece assembly for attacheing the beer hose. 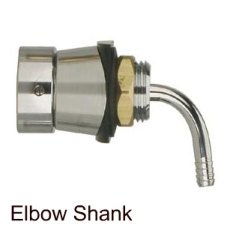 Various manufacturers also have more complex systems for certain applications that include shanks that screw directly into glycol "cooling blocks" and are integrated into multi-faucet beer towers. These are beyond the scope of this discussion.

When purchasing a new shank assembly be sure to match the bore size of the shank with the beer hose size you intend to use (3/16" and 1/4" are the most common). You will have beer pouring problems if your shank bore is larger than your beer hose size.

The Shank Parts (the numbers refer to the drawing above):

The remaining parts of the shank assembly include a flange (4) and faucet coupling (3). The flange provides the exterior mounting surface and allows a visual transistion from the outside of the tower or wall to the faucet coupling which is a rotating piece that screws onto the faucet to hold it onto the shank.

The flange for a cylindrical draft tower will be curved to accomadate the surface of the tower. The faucet coupling is attached to the shank with a snap ring(1) and sleeve (2) that hold it onto a slightly raised flange near the end of the shank and allow it to turn so it can thread onto the faucet.

The very end of the shank will have teeth embossed on it that provide a grip surface for the faucet whose interior mounting surface has corresponding grooves. This connection, when mounted properly will prevent the faucet from spinning in place and wearing down on the washer.

Be sure to mount the faucet allowing the teeth on the shank and the grooves on the faucet to match-up. Improper assembly here will cause leaking.

Your shank assembly will usually include mounting hardware that generally includes: a metal washer (6), spacer (5) and lock nut (7). These are the parts that hold the assembly to the draft tower or refrigerator wall/door.

For a cylindrical draft tower, the spacer is curved on one side to accommodate the curvature of the inside of the tower wall. This allows the assembly to tighten down properly without a wobble.

On refrigerator wall or door assemblies a tubular spacer is used to prevent crushing the insulation of the refrigerator. It should be cut to the exact depth of the hole.

Replacement parts are available for all of the shank assemblies.

Return to Draft Beer Equipment from Beer Shanks
Click to view our Terms of Use. Copyright 2009 draft-beer-made-easy.com